Posted on March 7, 2020 by smilesomebodylovesyou

Hopefully none of you had or get the norovirus I had. Ugh. A solid week of living in the throne room. Upside, I lost 8 pounds. Down side, it’ll all come back due to losing it to dehydration.

It is the commonest cause of gastroenteritis, which is the inflammation of the gastrointestinal tract and includes symptoms such as diarrhea, vomiting, abdominal pain, fever, and dehydration.

And the transmission, ewww! We cloroxed the house down to the remotes. I’m taking even longer to wash my hands than normal and we’ve always gone through the soap. Now it is antibiotic soap.

So while I was recuperating I delved even deeper into cryogenics or as I found out cryonics. Because in Saving Grace, they find a hidden cryonics lab in the mountains.

And in it are frozen people!

From Wikipedia, the free encyclopedia

Jump to navigationJump to search

For the study of the production of very low temperatures, see Cryogenics. For the low-temperature preservation of living tissue and organisms in general, see Cryopreservation. For the Hot Cross album, see Cryonics (album). 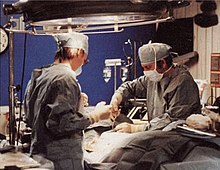 Technicians prepare a body for cryopreservation in 1985.

Cryonics (from Greek: κρύος kryos meaning ‘cold’) is the low-temperature freezing (usually at −196 °C or −320.8 °F or 77.1 K) and storage of a human corpse or severed head, with the speculative hope that resurrection may be possible in the future.[1][2] Cryonics is regarded with skepticism within the mainstream scientific community. It is generally viewed as a pseudoscience,[3] and its practice has been characterized as quackery.[4][5]

Cryonics procedures can begin only after clinical death, and cryonics “patients” are legally dead. Cryonics procedures may begin within minutes of death,[6] and use cryoprotectants to prevent ice formation during cryopreservation.[7] It is, however, not possible for a corpse to be reanimated after undergoing vitrification, as this causes damage to the brain including its neural networks.[8] The first corpse to be frozen was that of Dr. James Bedford in 1967.[9] As of 2014, about 250 dead bodies had been cryopreserved in the United States, and 1,500 people had made arrangements for cryopreservation of their corpses.[10]

Economic reality means it is highly improbable that any cryonics corporation could continue in business long enough to take advantage of the claimed long-term benefits offered.[11] Early attempts of cryonic preservations were performed in the 1960s and early 1970s which ended in failure with companies going out of business, and their stored corpses thawed and disposed of.

I obviously had to change it up a bit for my story. Frozen people were put in their ‘coffins’ still alive and frozen. So, I took a bit of creative license! That’s why it’s fiction. I did a bunch of research on cryogenics & cryonics that helped.

Cryonics works by preserving people’s bodies in ultra-cold temperatures in hopes of reviving them in the future when better technology and medicine exist. Another far-cheaper method, costing generally just a few thousand dollars, is getting a high-concentration aldehyde brain preservation. Transhumanists hope that revived brains can be placed in robotic or genetically engineered human bodies in the future.

Cryogenic freezing is the process of preserving a dead body with liquid nitrogen.

Advocates believe that scientists will one day work out how to warm the bodies up and bring them back to life, by which time doctors might be able to cure cancer and other diseases which are untreatable today.

Currently, cryogenic freezing can only happen once someone has been declared legally dead.

Since cryonics isn’t as well known as cryogenics, I went with the word cryogenics rather than cryonics. My descriptions mixed the processes together, so I took that risk since I was writing a fiction novel and not a scientific paper. But the more I read, the more I think I’ll change it. I’m currently editing so it is the perfect chance to correct the wording. In the interest of using the correct word and not offending any scientists that may like to escape in a post apocalyptic world with dragon shifters!

I'm an author but I can only talk about me so much! So 5 out of 7 days I feature other romance books and 1 out of 7, I post sales. I usually reserve only one day for myself.
View all posts by smilesomebodylovesyou →
This entry was posted in Uncategorized. Bookmark the permalink.